MAKE IT A GREAT DAY!
BLAINESWORLD is a podcast that focuses on positive news and information about people and organizations in both Western NC and throughout the country. 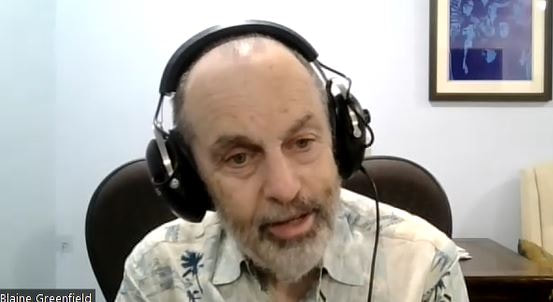 You'll find past shows listed in chronological order with the most recent one at the top.

Blaine Greenfield began his radio career when he gave his football predictions on Rider University's radio station when he was an undergraduate. The show only ran for one season, yet it quickly gained a reputation as being extremely helpful to gambling fans. It seemed that they would listen, then go exactly opposite the picks they heard ... as a result, they made a lot of money!

Fast forward to 1993 and Blaine resurfaced on as the radio host of CONSUMER CONNECTION on WTTM/920 AM. After five years, the station first changed format and then eventually shut down. Yet as a result of his efforts, he was named 1995's Media Advocate of the Year by the New Jersey Small Business Administration.

Blaine next became host of PULSE OF THE NETWORK on WWFM/89.1 FM, Trenton, NJ, in 2000. This weekly public affairs show aired for five years until a management change.

Blaine then resurfaced on WPVM in Asheville, NC, in 2018. That show (BLAINESWORLD) ran for through the first half of 2018 and focused on the Asheville theatre scene, as well as on positive news and information about people and organizations in both Western NC and throughout the country.

As of June, 2022, BLAINESWORLD has morphed into a podcast that can be seen as indicated above.

Note: If you'd like to be a future guest or have any suggestions for guests, please click Here and put the word GUEST in the subject line